The telltale sign of TPMS sensor trouble on our rigs is that the TPMS ECU no longer receives a signal from a sensor, and rather than merely illuminating the Low TIre Pressure warning on the dash, it flashes it for a minute every time you start the car, and afterwards it settles to solid.

My original TPMS sensors -- located inside the tire/rim cavity -- from chassis build date Feb2014 have finally expended their batteries, and eight years was considered a pretty decent lifespan from these batteries. The current Michelins X-Tour tires were installed in Oct2017 at around 52k, and at 111k still have lots of tread life left; I've retired and am driving it a lot less, so these might suffice for another three years or more.

Two weeks ago, I didn't know much about modern TPMS sensing, as our older rigs with TPMS used the "indirect" sensing method, where the ABS system's wheel speed sensors are used to calculate when a tire is low, using its smaller rolling radius when compared to the other wheels (or a stored revs/mile constant that is stored when the system is reset). So I had to do a bit of boning up on how this has been done more recently, and found this hidden tire shop cash cow of a design.

Just for fun, I let our local tire shop have a go at it, and they provided a quote of $346 to replace all four TPMS sensors -- just the sensors, plus "TPMS Relearn". 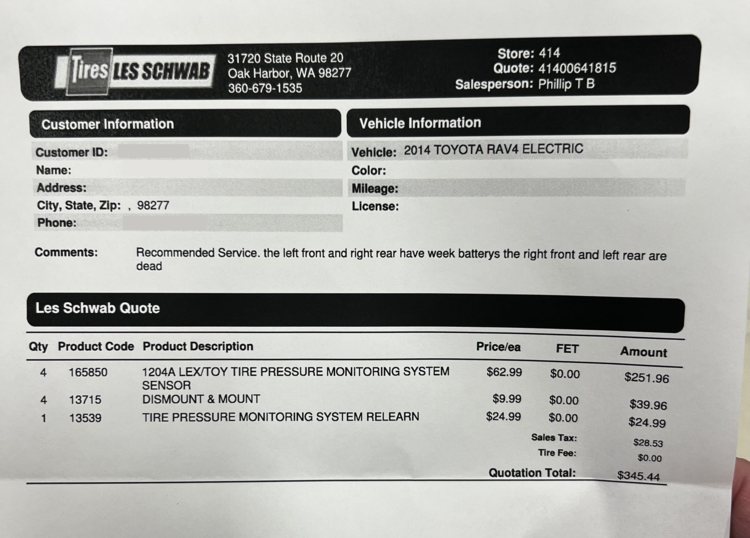 I own a couple of Toyotas, so I'll be facing this issue a few more times in the next few years. I bought a couple of tools, some very cheap sensors, and changed them myself in my driveway on a dark, windy night, in about two hours, without removing the wheels from the vehicle.

Each sensor's battery can be replaced . . . if you're willing to un-pot its PCB and solder in a replacement. You have to get the thing out of the wheel first, so altogether you're facing more or less an all-day job, but it can be done, and there are many YouTube vids showing people doing this.

If you have a pirated/cracked copy of Toyota Techstream, and a spare laptop set up to run it, plus the matching J2534 USB<->OBDII adapter dongle, you can use it to update TPMS ECU to use the new TPMS sensors' IDs, so it knows to "listen" to only your sensors and not the ones in the wheels of the cars parked next to you. This is what the dealer does. The cracked "kits" for Techstream are spotty in quality of cracking and ease of installation, some have malware installed during the installation process, and there's a couple of other gotchas, plus you need to be careful with the 32-bit vs 64-bit version, but with enough time and a bit of luck, it can be a useful tool worth the investment. But it doesn't just work out of the box, in many cases. You can acquire these things via Amazon for as little as $40 -- here's a sampling: 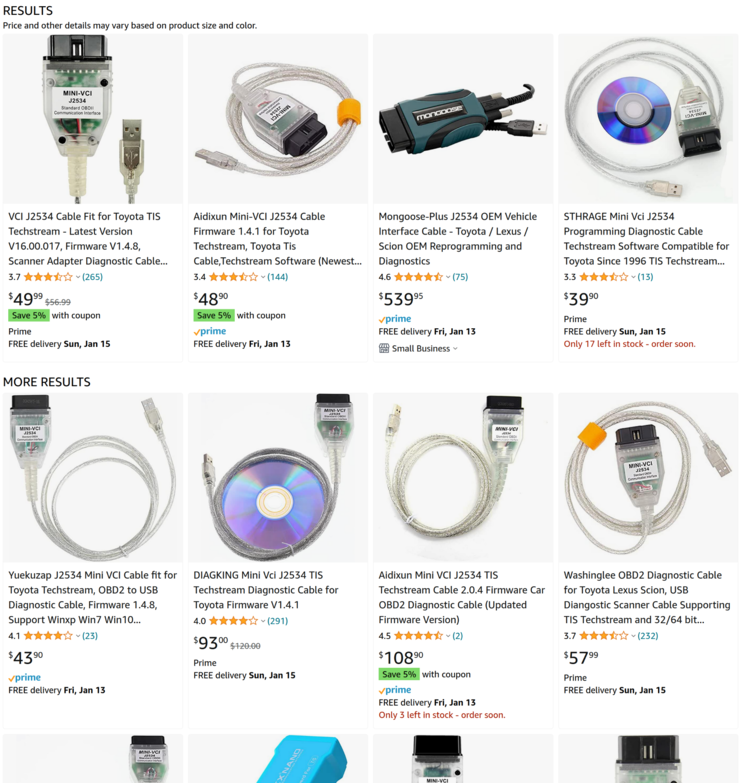 A third method is to buy a programming tool and either programmable sensors (no ECU update required), or non-programmable sensors, and use the tool instead of Techstream, to update the TPMS ECU via OBDII. This is the route I took.

The programming tool I settled on is the Autel MaxiTPMS TS508. Nominally a $200+ tool, it can be had from a couple of different sources for $140 shipped with tax (I bought mine from Aaron Creech on FB; his price has gone up to $125 + $15 shipping + tax since my purchase, but there are other sources (eBay) for much less than retail, even for brand-new units. Mine, from Aaron, registered fine on Autel's website, and I was able to download/install new firmware for it after registering it. The one I received is in a soft case with zipper opening and pockets for documentation and the two cables (USB charging; OBDII); most units for sale show the hard case instead -- for more $$$ 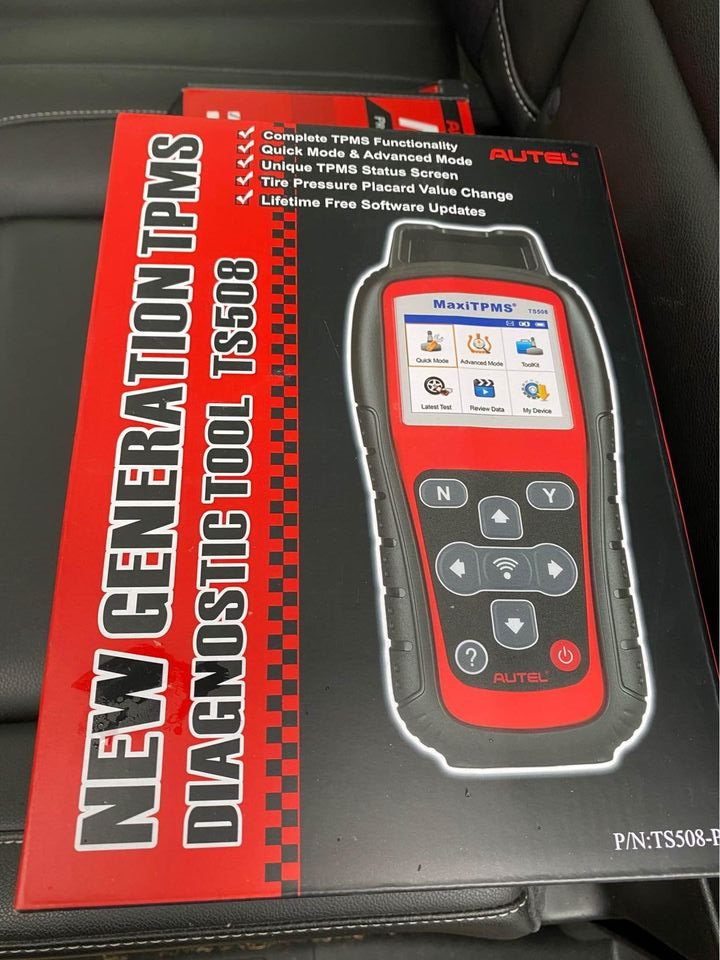 [Registering an account @ Autel was a poor experience; Firefox was difficult and Chrome only slightly better. Several UI issues with the registration process. But you only have to do it once, sorta.]

I decided to install the cheapest aftermarket sensors I could find with a reasonable feedback rating, and I settled on this set via Amazon for $50 after tax. 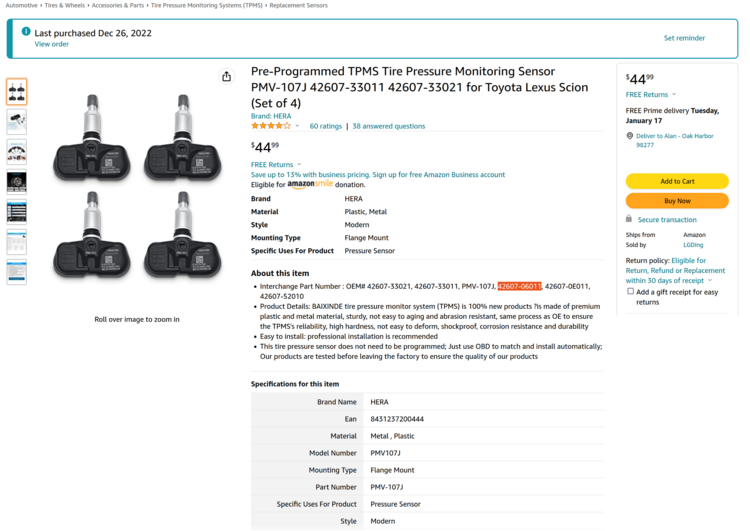 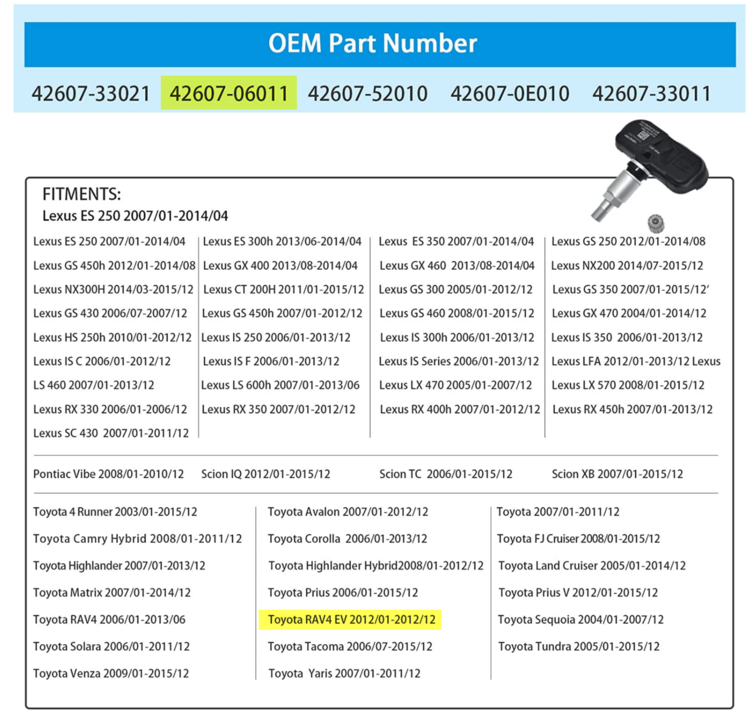 The MaxiTPMS TS508 verified the tire store's diagnostic. Skipping ahead, here's the tool reading one of the low-battery sensors, with the sensor removed from the wheel. To be clear, the tool can read the sensor when it's installed as well, but I didn't think to take a pic of it then. 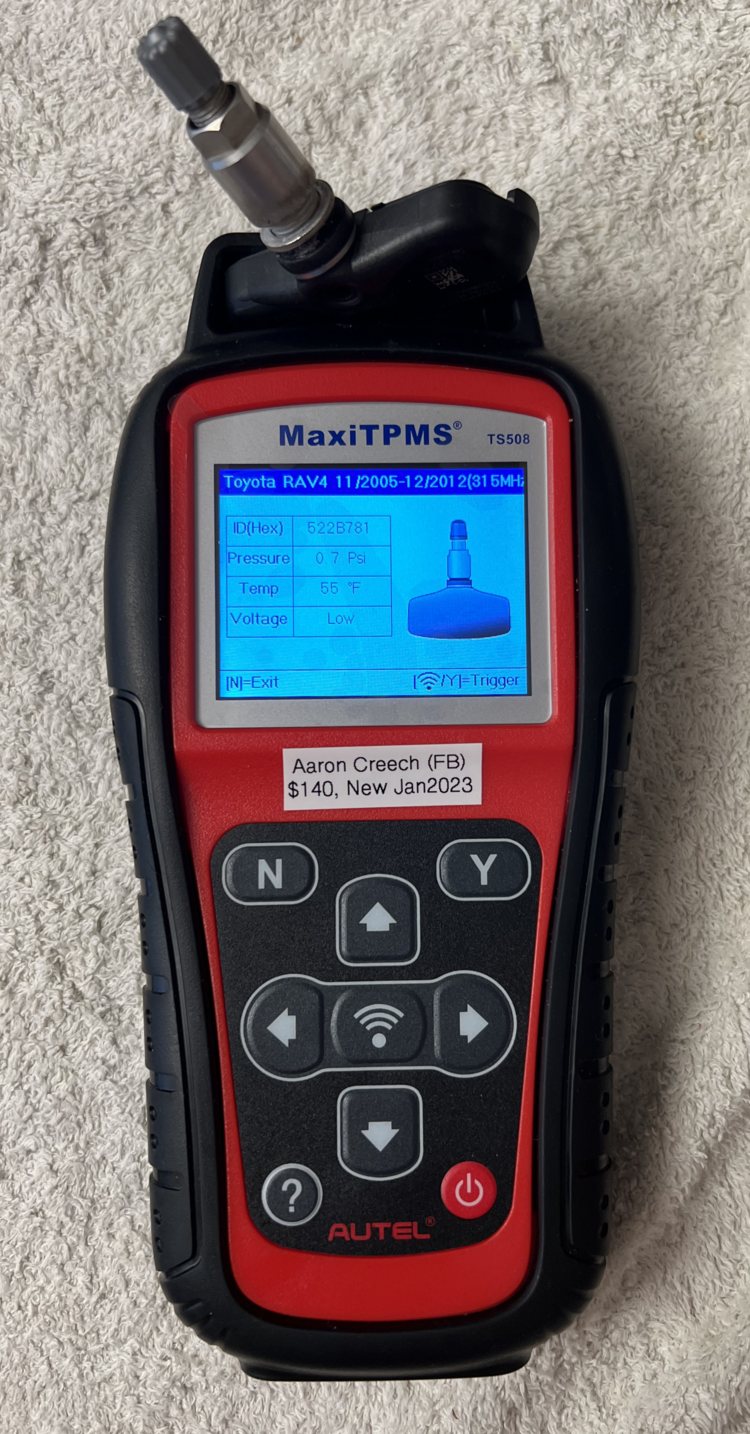 The MaxiTPMS TS508 was also able to read each of the new sensors fine, out of the box, before installation.

Lastly, the each tire's outside bead must be broken, in order to access and replace the TPMS sensor. While I do have access to a real tire changing machine, I decided to buy a portable bead breaker (I do like to collect tools), and change the sensors with the wheels mounted on the vehicle. I bought a BeadBuster XB-452, $149 shipped, no tax. Made in USA, and it has the optional longer "finger" adapter, which as it turns out I did need.

The BeadBuster allows to break the outside bead of the tire without a tire machine, spoons, ramps, presses, hammers, or any other tools. You can use a 3/4" wrench to operate it, though it's a lot faster with a power tool. I used my old air ratchet.

You'll need to remove the valve core (which requires a cheap tool that most people do not have, but it's well under $10 even for a very fancy one) to dump the air from the wheel, and more importantly to allow a sufficient volume of air into the wheel later, to re-seat the bead; a mini air compressor will not suffice, unless you resort to old-time hacks or flammables, neither of which I'll document again here, BTDT, now I have a real air compressor and don't need those tricks. 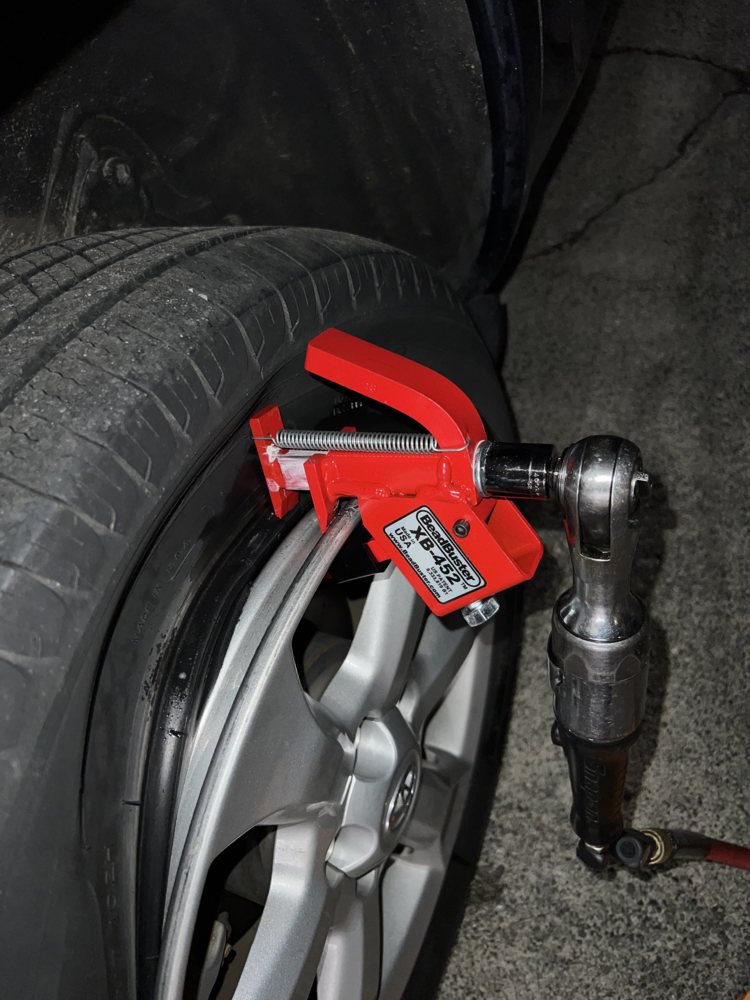 I found the BeadBuster a bit fiddly in use, and the short "finger" not working well at all. With the longer "finger", more angle adjustment was needed than the guide videos showed for other rim types, but after a few tries I was able to break all four tires' beads without sidewall damage or significant rim scratches -- nothing that shows after the tires are re-seated.

Sorry for the poor focus: 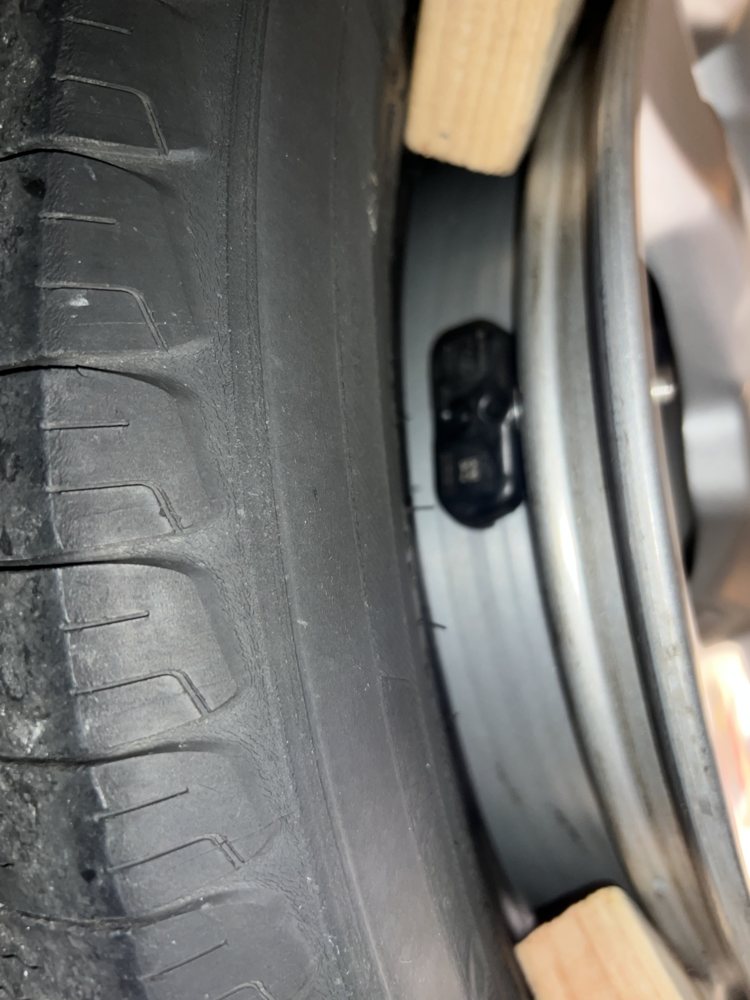 After all the sensors were replaced, the next trick was figuring out which "vehicle" to select on the TS508's menu. What definitely worked was 2005-2012 RAV4 (315mhz), for both the OEM and the replacement sensors. 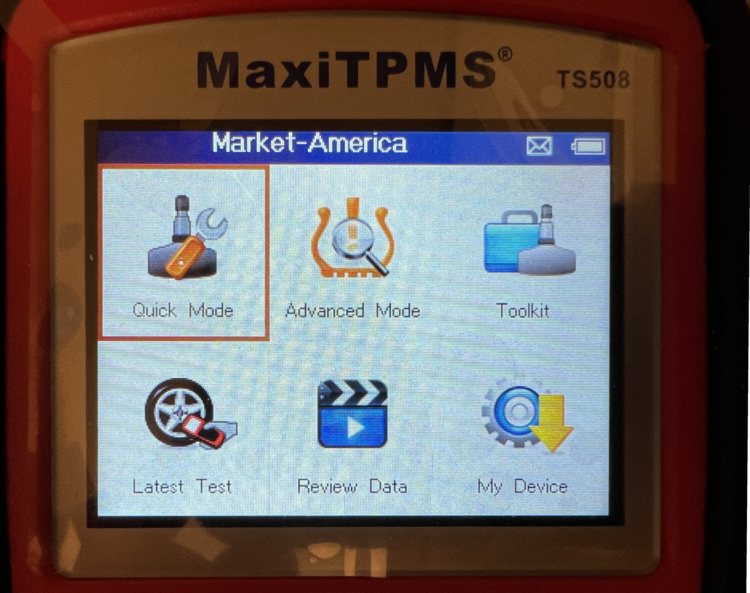 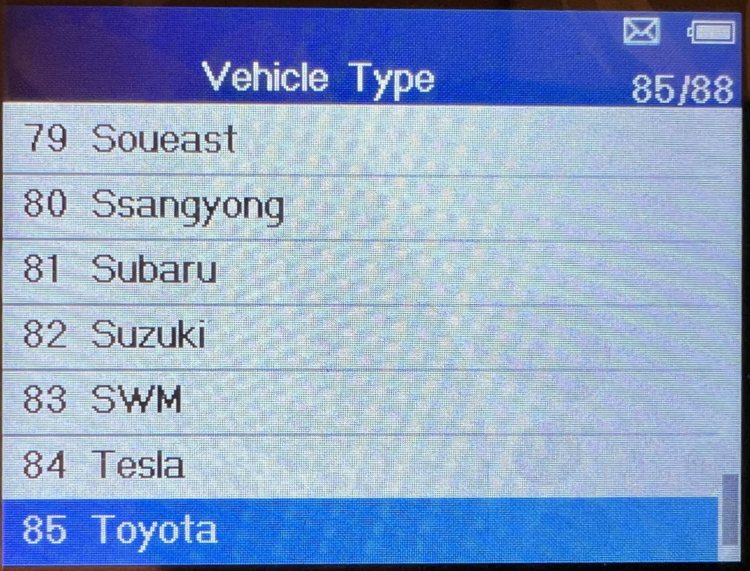 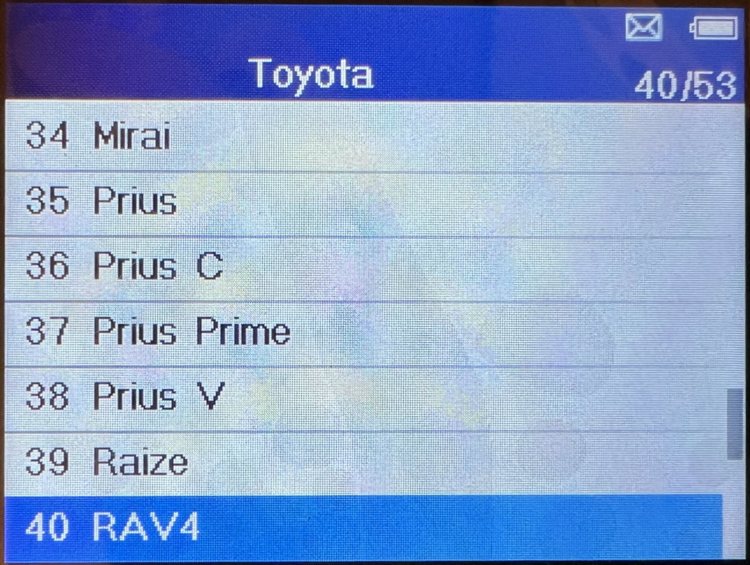 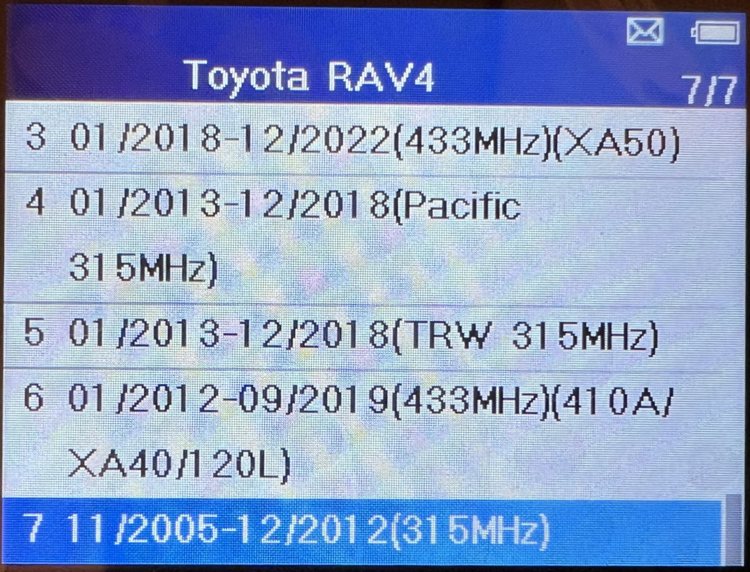 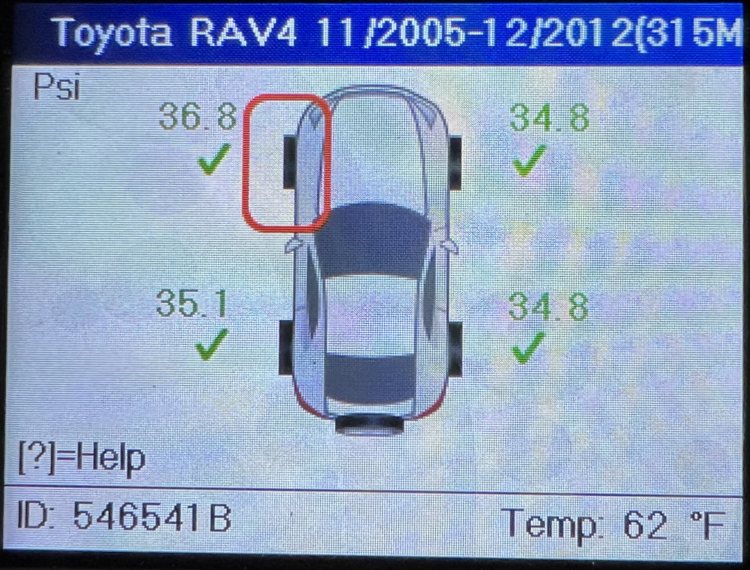 I was able to use the tool to read all four sensors' IDs (and verify their battery condition, and the current tire pressure) into the tool's memory, then connect the tool's OBDII adapter cable, turn on the vehicle, and via OBD the tool updates the TPMS ECU with the new sensors' IDs.

Thanks, this is wonderful information.
Post Reply
3 posts • Page 1 of 1